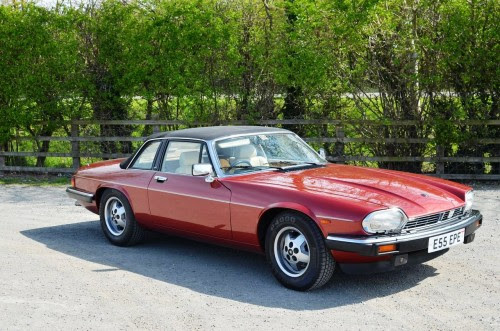 1987 JAGUAR XJS-C CABRIOLET 3.6 AUTO
Not only does Jaguar’s wonderful XJS pull off the tricky feat of getting more handsome as every year goes by, it also has that magic carpet ride that no longer seems to exist in the cars of today.
Conceived as a comfortable and long-legged Grand Tourer rather than an out-and-out sports car like the preceding E-Type, the XJS made use of the fabulously refined Jaguar XJ saloon platform and running gear. Launched in 1975 it was initially only available as a V12, but soaring oil prices meant that a smaller engined version was soon on the cards.
In 1983 it became the first model to receive Jaguar's new 225bhp 3.6-litre AJ6 engine, a very smooth and potent unit that was not far short of the V12 in terms of outright performance and was in a different league for economy. "It is the 24-valve engine's flexibility that impresses most," wrote Autocar. "Such is its low-down pulling power that, in town and urban conditions, one rarely needs more than 2,000rpm to keep up with the traffic flow." Capable of hitting 60 in a whisker over 7 seconds on its way to a top speed of 137mph, at a steady 56mph it could still deliver 36mpg.
Fresh detailing and better build quality also helped restore the XJS’s lustre and Jaguar turned to creating an open-topped version. In engineering terms, Jaguar's first version of an open-top XJS was somewhat conservative. The car had not been designed with an open version in mind, so a Targa-top roof was adopted. This used a substantial roll hoop to maintain rigidity in the absence of a fixed roof and the two removable roof panels could be stored in the boot. The coupe’s rear seats were removed and replaced with a pair of luggage lockers topped by a parcel shelf.
Widely regarded as the best-looking XJS of all, only around 5,000 cabriolets were built before it was replaced by the full convertible in 1988, and good ones are increasingly sought after today.
First registered in October 1987, this beautiful Bordeaux Red Cabriolet is definitely one of the good ones and has covered less than 52,000 miles to date in the hands of just three owners. An extremely rare 4-speed automatic (most were 5-speed manual), it has been in the current enthusiast ownership since 2006, the second owner being a retired doctor who had owned it for 20 years.
Supplied with an excellent service history and a full (unused) toolkit, the car is said by the vendor to be “totally original and virtually unmarked throughout with a superb Magnolia hide interior”. Further said to drive beautifully with an MOT until August 2015, this low mileage beauty also comes with an attractive number plate and is sure to bring a great deal of pleasure to its fortunate fourth owner in the coming summer months.