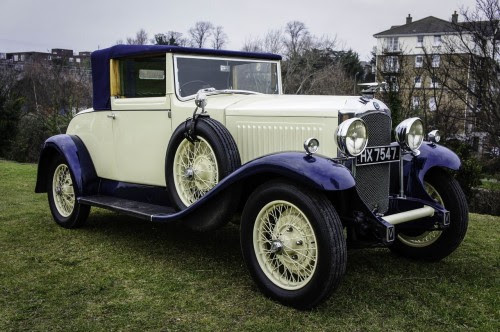 In the early 1920s, Vauxhall were firmly sited at the top of the pile when it came to building top quality, sporting cars.
The pre-World War I Prince Henry had laid the foundations for the post-war 30-98, recognised by many as the ultimate sporting car of the period and for some years the world’s fastest production car – the Bugatti Veyron of its day you might say.
In reality though, most of Vauxhall’s business came from their touring versions, the robust 23-60 which was very popular in Colonial export markets and the dainty 14-40 which sold in significant numbers both at home and abroad. By 1925, General Motors were on the acquisition trail in the UK, buying Vauxhall and adding their own stamp on model development from then on.
For 1928, Vauxhall unveiled the 20/60, their first GM influenced product.  A conventional touring car, it used a 2.7-litre overhead-valve six-cylinder engine. Vauxhall provided the standard tourer and saloon bodywork, while their long-time ‘tame’ coachbuilder Grosvenor added a range of more exotic offerings, including the elegant Grafton Golfer's Coupe on offer today.
A capacity increase to 2.9-litres in 1929 coincided with a change of name to T-type, which in turn was swiftly followed a year later by the T80, a 3.3-litre version with a taller radiator and mechanical fuel pump. Just 624 T80 models left the works before GM’s next design, the more mass-market 2-litre Cadet made its debut.
This elegant T80 dates from 1930 and by 1969 was owned by William Farquhar of Larne in Northern Ireland, according to its old green logbook. A receipt from S Erskine of London dated 24th October 1974 to a Mr Creed of Rickmansworth shows that he paid £1,050 for the car along with a Rolls 20/25 for £1,900 and a Rolls-Royce Chassis for £725. There is a further letter on file dated November 1974 from a gentleman who was maintaining the ' Register of Old Vauxhalls' asking if the new owner could be included on the list.
According to invoices on file, significant restoration work took place in the early to mid ‘90s, a bill from Barton & Son Craftsmen Coachtrimmers for £4,700 including a complete interior retrim in hide, new wool cloth headlining and Wilton carpeting. The hood was also replaced in blue Mohair. A couple of Polaroid photos show the car during these renovations.
It was sold once again, this time through Barons Auctions in 2004, returning once again to Northern Ireland and not long after was sold on to a gentleman in Southern Ireland who added it to his collection. It has been carefully looked after since and was a regular competitor in the IVVCC International Gordon Bennett Rally from 2011-2014, winning the event outright in 2013.
The document file contains a photocopy of the original handbook along with facsimiles of the original sales brochure and poster showing the ‘Seven Models in the Vauxhall Eighty Range’. Also present is the starting handle and dickey seat ‘T’ key along with spare plugs and points.
Reputed to drive as well as it looks, its lusty 3.3-litre straight-six provides very satisfying performance on the road. These quality coachbuilt Vauxhalls were made at a time when the marque was considered very ‘upmarket’, well before they moved into the volume sector under GM’s influence.
First registered on 7 January 1931, it is understood that this T80, with its superb Grosvenor-built Coupe coachwork must have left the works as a rolling chassis well before the end of 1930. As a consequence, it is eligible for VSCC events and will hopefully continue its run of Rally success in the hands of its new owner.
Posted by jeffharris at 16:50