"CROSSING THE BLOCK"
From 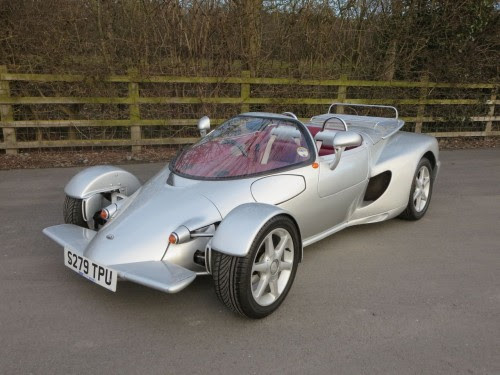 Ginetta was founded in Suffolk in 1958 by the Walklett family and quickly established a reputation for building specialist racing and sports cars with excellent performance and fine handling.
The Walkletts ran Ginetta until 1989 when it was sold off to a group of investors at which point they went into semi-retirement. However, you can’t keep a good engineering family down and they soon began work on developing another sports car, more road-focused this time and aimed squarely at the kind of driver who would typically choose a Lotus. It had a target weight of just 750kg and would cost around £30,000.
Called the Dare DZ, the mid-engined road rocket was launched in 1998 and featured futuristic-looking GRP bodywork like nothing else on the market. Available as either a convertible or fixed-head coupé with gull wing doors, the DZ was built around a composite chassis with moulded-in tubular steel framework. Suspension was independent all round by means of wishbones and coil spring dampers while there were vented disc brakes on all four wheels, gripped by four-pot alloy callipers at the front.
Power came from a 2.0-litre Ford Zetec, transversely mounted amidships, producing either 130bhp (normally aspirated) or 210bhp (turbocharged). Weighing only 700kg, the DZ had a power-to-weight ratio of 194bhp/tonne (un-blown) so its performance was electrifying.
The car offered here is the first of only ten DZs made, six of which were convertibles, and served as the factory's demonstrator, being displayed on its stand at the 1998 Motor Show in Birmingham and at the Brooke Kensington dealership in London. It was also used by Mark Walklett for his honeymoon to France, equipped with a roof rack for the trip. 'S279 TPU' has also appeared on television, driven by Vicki Butler-Henderson for the BBC's 'Top Gear' and has featured in magazines including 'Top Gear' and 'Speed & Style'.
It has had only three owners prior to the current vendor: the factory, Niall Poole and M Luck, and has covered less than 30,000 miles from new. In 2000 the factory removed the original turbocharger, and the now normally aspirated engine breathes via Weber fuel injection. Finished in silver with red leather interior, this rare and exclusive British sports car is offered with service history, V5C registration document and an MOT valid until September 2015. It also comes with a catalytic converter (not fitted) which would be required to pass the German TUV (MOT) test.
Thrilling to drive and stunning to behold, this incredibly rare machine, with superb provenance, is guaranteed to generate a huge amount of interest wherever it goes. It would make a fascinating addition to any collection. 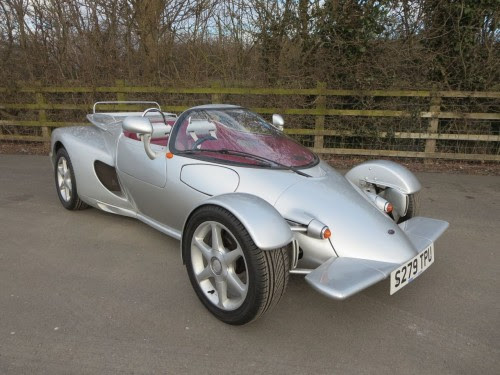 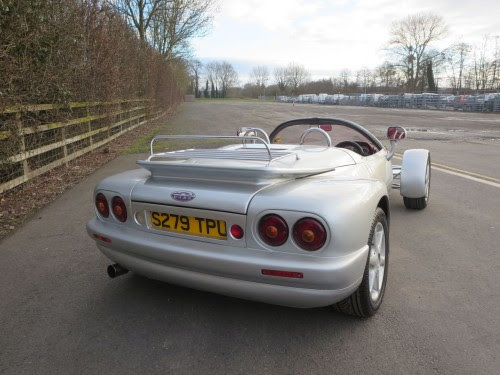