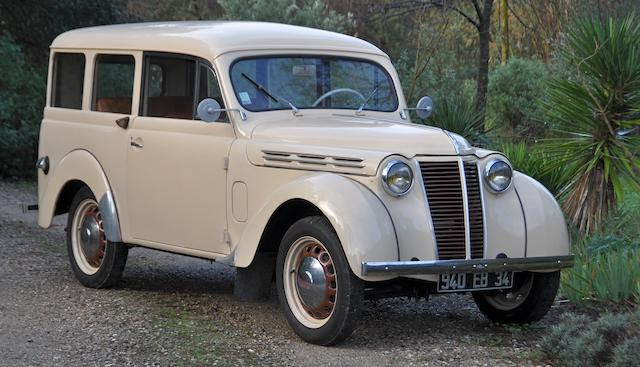 A small family saloon, the Renault Juvaquatre was introduced in 1937 and continued in the range after WW2. Production of the saloon version ceased in 1948, its place in Renault's range having been taken by the 4CV. The latter was rear-engined and thus not ideally suited to estate car or van configurations, so the venerable Juvaquatre continued to fulfil those roles until the arrival in 1960 of the Renault 4, by which time it was being built with the 845cc engine of the Dauphine model.

The current vendor bought this beautiful Juvaquatre in 2000 from the previous owner, who had owned it since 1984. In 2010 the car was completely restored by the current owner. Works carried out include repairing and repainting the bodywork; overhauling the engine; re-chroming the brightwork; refurbishing the wheels; restoring the interior; fitting a new clutch; and replacing the tyres. The car has covered only some 500-or-so kilometres since completion and is described as still in generally very good/excellent condition. Possessing practicality and charm in equal measure, it is comes with French Carte Grise and Contrôle Technique.
Posted by jeffharris at 11:10