" CROSSING THE BLOCK"
Featuring: Bonhams (USA)
As the UK Auction market takes a sabbatical for the next few week we turn our attention to the USA and Bonhams Scottsdale Sale at the begging of January 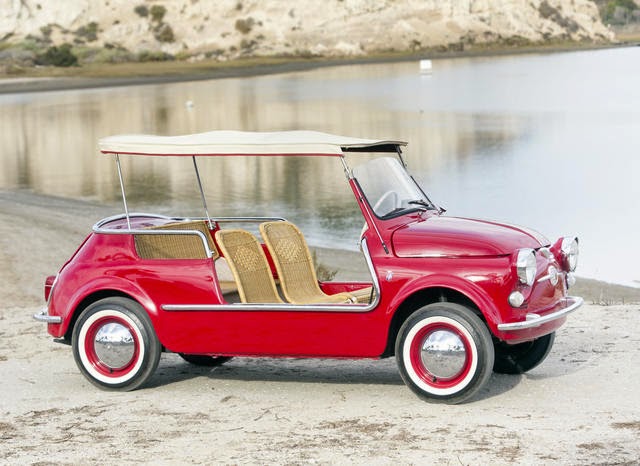 
*Beautifully presented example of the charming FIAT Jolly
*Few California owners and believed to be just over 4,000 miles from new
*Matching numbers example
*Ready for the beach or the ranch
*Perfect Monterey paddock vehicle

As redolent of La Dolce Vita Italy as the immortal Vespa scooter, the 'beach car' is most famously embodied by Ghia's Jolly, unquestionably the best known of the many alternatives to the standard FIAT 500 and 600 models ranges offered by some of Italy's finest carrozzeria.

Born of FIAT boss Gianni Agnelli's wish for open motorized transport from his massive yacht, the Agneta, during port stops along the Mediterranean coast, the finished car was dubbed 'Jolly de Plage', or Joker of the Beach. Based on the 500 and 600 models' unitary construction, these agile compacts featured independent suspension, a four speed synchronized transmission, with the engine at the rear. The 0.5-Liter air-cooled twin was hardly a performer, but light construction (and mostly low-speed intended uses) made the package work well.

The Jolly found favor as courtesy transport for patrons of luxury hotels and golf courses, such as Catalina Island off the coast of California, where a fleet of 32 Jollys provided taxi service or, as initially intended, for use ashore after one had docked one's yacht on the Italian or French Riviera. Lacking doors and equipped with waterproof wickerwork seats, the Jolly was only practical as leisure transport, thus confirming its owner's status as someone who could afford a car 'just for fun' (indeed, the Jolly was roughly twice the price of the base model it was derived from). Among the list of Jolly owners in the day are jet setters such as Aristotle Onassis, Yul Brynner, John Wayne, Grace Kelly, Henry Ford II, and even President Lyndon Johnson.

Built during the early part of 1959, this gorgeous FIAT 500 Jolly is believed to have resided in California since new, and is a US market 500 model, featuring the desirable 'Bug Eye' lights and the absence of side marker lights. The Jolly's long-term original owner, a Newport Beach, California resident, purchased the new FIAT from the FIAT agency in nearby Garden Grove. It is believed that this owner kept the Jolly from 1959 through 1984, when a Mr. James Hayton of neighboring town Corona Del Mar purchased the car. It would remain in Mr. Hayton's ownership until being purchased by the consignor in 2013.

The Jolly was in original condition when purchased by Mr. Hayton, and in 1992 he decided to treat his beloved beach car to a repaint in its original red color. Brightwork was also refinished to bring up the car's presentation, while more recently, the interior was restored with new carpet, and the wicker seats redone by furniture upholsterer Rattan Mann. The Jolly is well known to a number of FIAT 500 clubs, and retains a wonderful historic California license plate.

A very honest and well-kept Jolly, this fine example was recently fitted with new BF Goodrich Silvertown white-wall tires, and displays just over 4,000 miles on its odometer, a figure that is believed to be the car's actual mileage. Complete with a matching spare tire, as well as an original jack and tool kit, this charming Jolly was recently awarded the Gianni Agnelli trophy at the Desert Concorso in Palm Desert, a testament to this car's place among the FIAT cognoscenti.

Beautifully presented inside and out, this charming Jolly would be a great choice for the ranch, beach, yacht club, or racing paddock, and will surely initiate smiles and conversations wherever it goes.